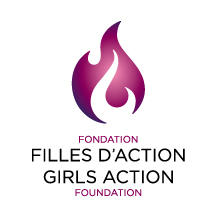 Focused on young women’s leadership and civic engagement, this project commemorates the centennial anniversary of British women gaining the right to vote in Canada as a means to highlight groups of women who have traditionally been disenfranchised in Canada; how women from different communities won the right to vote; and how this disenfranchisement has caused barriers to political participation that still exist.

Girls Action selected social change project proposals from 17 young women and non-binary youth representing Quebec, British Columbia, Ontario, Alberta and Nova Scotia, who want to create positive change in their communities. After completing a six-week, bilingual civic engagement and leadership training, each participant received a micro-grant of up to $1,000 to support the implementation of their project.

After organizing and facilitating several conversations around conjugal violence for marginalized women of colour, and seeing the impact on the women who participated, Sinthusha asked herself: How can we reach more women who don’t have access to resources?

She reflected on these questions to create her social change project, specifically aimed at helping recently migrated women, with the support of Girls Action’s program for young womxn leaders, Women, Let’s Take Our Place!

She decided to create customized banner pens that would allow women to have direct access to the resources they can consider when in need. “Many of the women who live with abusive partners, live in isolation and in fear. I believe these banner pens would allow these women to have access to a resource that they otherwise would not have.”

Stay Tuned for more updates on the pen project.